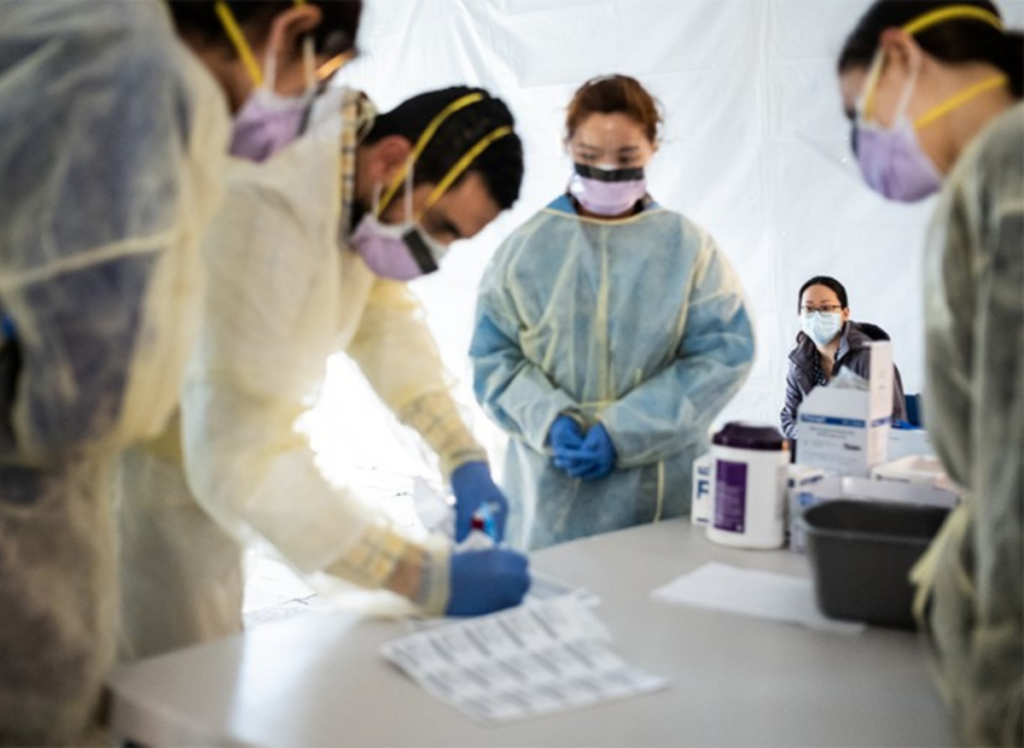 The Bronx is a “ticking time bomb” when it comes to the coronavirus, and could soon become the epicenter for New York’s crisis with the deadly bug, local health workers told The Post. The borough had 4,243 recorded coronavirus cases as of Friday night, according to city officials — fewer than Brooklyn’s 6,095 cases, or Queens’ 7,362 cases. But the Bronx is still ripe for a COVID-19 epidemic because of its high numbers of residents living in multigenerational housing with a relative lack of resources, said Sumir Sahgal, the chief medical officer for Essen Health Care, which provides primary, specialty and urgent care for over 80,000 Bronx residents. If primary care offices don’t receive badly needed supplies soon, it “could lead to a potential explosion amongst the Bronx residents,” who currently total 1.5 million, Sahgal said. “It may not be the most populated, but it is at the highest proportional risk of all counties.” Saghal’s staff is running dangerously low on protective equipment such as masks and gloves and has had to close clinic locations as caregivers themselves fall ill with the virus. Essen has already seen 25 members of its staff test positive for the virus — including Sahgal himself — as Bronx residents have visited its screening centers. Sahgal’s staff has few of the N95 masks that are recommended for medical professionals and has resorted to using standard surgical masks “Our patients are getting sick, walking into urgent care centers and coughing on the staff and the care providers,” Sahgal said. “I’ve quarantined myself in my home and I’m taking care of my patients virtually.” Steven Merahn, a doctor who works with Sahgal, said that despite the attention Manhattan and Queens have received as hospitals are flooded with coronavirus patients, The Bronx is “the true ground zero for what’s going to happen.” “We’ve not had the access to protective equipment and testing kits,” he said. “If that doesn’t happen soon, our professionals are going to be taken out of action.” Sahgal said that as soon as his team saw the growth of cases in New Rochelle, with its population of 8,000 people per square mile, he knew that The Bronx — which has 35,000 people per square mile and has many multigenerational families sharing oftentimes cramped apartments — was going to see “a tsunami of patients who were going to be really sick.” Indeed, of the more than 1,000 people that Essen has tested for the coronavirus, 50 percent of tests came back positive. “We’re already one of the poorest congressional districts in the country,” Sahgal said. “The coronavirus has the worst mortality in high-risk populations, and we have every one of those in The Bronx.” He added that many of his patients are afraid of going to hospitals and that if his primary care staff falls ill, patients will simply stay home. “They tell us they don’t want to die in hospitals,” Sehgal said. “We’re going to have hundreds and thousands of people dying in their homes in The Bronx like in Spain and Italy.” Currently, Sehgal said that Essen has “barely” enough protective equipment to last through early next week and that it faces cutbacks if it does not receive more. “We’ll have to cut centers, we’ll have to cut down office hours,” he said. “We may go out and try to buy them at exorbitant rates, but we can’t afford to because we can’t pass those costs along to our patients.” Ultimately, the support for the primary care community will help lessen the load on hospitals and help slow the spread of the disease as they are able to locate and isolate patients who are sick as well as who need continuity of care, Merahn said. “Where are people with heart attacks going?,” he said. “We won’t be able to sustain our in-person care if our frontline staff falls victim to the virus.”
Essen Health Care Expands COVID-19 Care Program For The Bronx